University of Science and Arts of Oklahoma

Thanks to the extraordinary generosity of HeinOnline, we have access to a new database, Slavery in America and the World: History, Culture & Law. This is a collection of primary source materials about slavery, including laws, legal cases, Congressional debates, historic books & pamphlets, and modern histories and law reviews. HeinOnline is offering this database for free so everyone will be able to learn from the collection. Paul Finkelman, Editor-in-Chief of the database, describes its contents in detail:

This HeinOnline collection brings together a multitude of essential legal materials on slavery in the United States and the English-speaking world. This includes every statute passed by every colony and state on slavery, every federal statute dealing with slavery, and all reported state and federal cases on slavery. Our cases go into the 20th century, because long after slavery was ended, there were still court cases based on issues emanating from slavery. To give one example, as late as 1901 Chief Justice Oliver Wendell Holmes, Jr. of the Massachusetts Supreme Judicial Court had to decide if a man, both of whose parents had been slaves, could be the legitimate heir of his father, because under southern law, slaves could never be legally married. The library has hundreds of pamphlets and books written about slavery—defending it, attacking it or simply analyzing it. We have gathered every English-language legal commentary on slavery published before 1920, which includes many essays and articles in obscure, hard-to-find journals in the United States and elsewhere. We have provided more than a thousand pamphlets and books on slavery from the 19th century. We provide word searchable access to all Congressional debates from the Continental Congress to 1880. We have also included many modern histories of slavery. Within this library is a section containing all modern law review articles on the subject. This library will continue to grow, not only from new scholarship but also from historical material that we continue to locate and add to the collection.

Much of the non-legal material in this collection is based on the magnificent holdings of the Buffalo Public Library. Its rare book collection contains hundreds of nineteenth century pamphlets and books on slavery. The cooperation of that library and its staff helped make this project possible.

I end this introduction on a personal note. In 1974 I began a doctoral dissertation on slavery and law. I spend months sitting in the University of Chicago Law Library looking at volumes of printed reports, trying to find every slave case decided by a northern court (there were hundreds and hundreds of them). I searched for obscure statutes from the 18th and early 19th centuries. I looked for law review articles in such long-forgotten journals as the Monthly Law Reporter and the Western Legal Observer. If only Slavery in America and the World: History, Culture & Law had existed then! I would still have had to read and analyze everything. I would have had to frame my search questions carefully. But my search for source materials would have taken months instead of nearly two years. With this library, future scholars can spend more time reading and analyzing the sources, and much less time looking for them.

We have added Slavery in America and the World: History, Culture & Law to our database list and to some relevant Libguides, and we are working on integrating it into LEO Search and the Journals list.

Our catalog is back up!

Our catalog is back up! It was down for a little while earlier today, but we reindexed the catalog. That fixed the broken search function, and now it's running again! Thank you for your patience, and thanks for using our recommended LEO Search and Worldcat workarounds!

Catalog search is down, so here are some workarounds!

We have bad news to report; Koha, the library catalog, is temporarily down. The site loads, but It's not returning any search results. However, we have two workarounds you can use to find books and other physical items in the library!

First, we have Worldcat. This is a database that searches for books in thousands of libraries around the world, but there is a way to make it only search for items in Nash Library. On the search screen, find the part that says "Limit availability to" and then check the checkbox next to "items in my library."

Second, we have LEO Search. This normally searches through many databases and the library catalog, but there is a way to make it only search for items in Nash Library. On the search screen, scroll down and check the checkbox next to "In Library Physical Collection (plus some ebooks) ."

We are sorry the catalog is not working right. We are working on it and hope to have it back for you soon!

One of our subscription ebook databases, ACLS Humanities Ebooks, has recently added 323 books to their online collection! They have put together a spreadsheet listing all the new titles. ACLS HEB is a great collection with a wide assortment of academic books. They are not all strictly "humanities;" they also include art, music, social sciences, history of science, and other subjects you might not assume were in a "humanities" collection.

There are many different ways to find ACLS ebooks. You can get to the database itself and browse the whole collection from our link on the Database list. We also have all 5,000 of the individual books in our online catalog and in LEO Search, so when you do a search in the catalog or in LEO, your results include ACLS ebooks. We've just added the new books to LEO Search today. It can take 24 hours for newly added titles to appear in LEO Search, so if you want to read the new books right away, the catalog is the place to go!

IT has announced that they will be doing server maintenance on November 22nd (Tuesday) from 2 to 5 p.m. All Nash Library public computers, the Computer Science Lab (AH 108), Math Lab (AH 213), Social Science Lab (DH 228), and Music Lab (DH 247) will also be down for maintenance at this time. Please plan your work accordingly. Hopefully, since this the day right before Thanksgiving Break, this won't disrupt anyone's work too much!

As Long Night at Nash approaches (remember, it's Thursday, November 17th, from 6 a.m. to midnight), we thought we'd show you some of the free swag! Here's one of the boxes of water bottles: 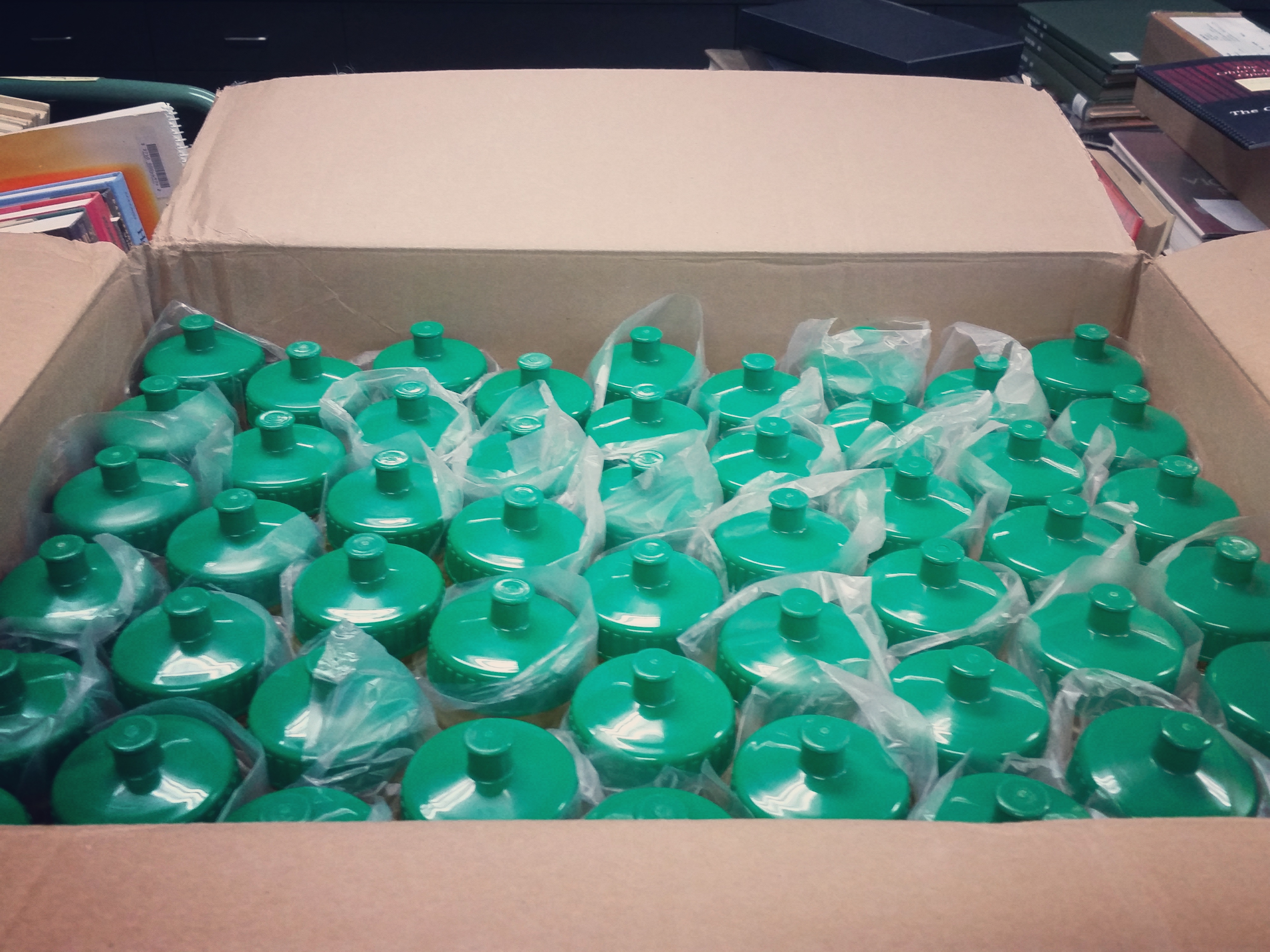 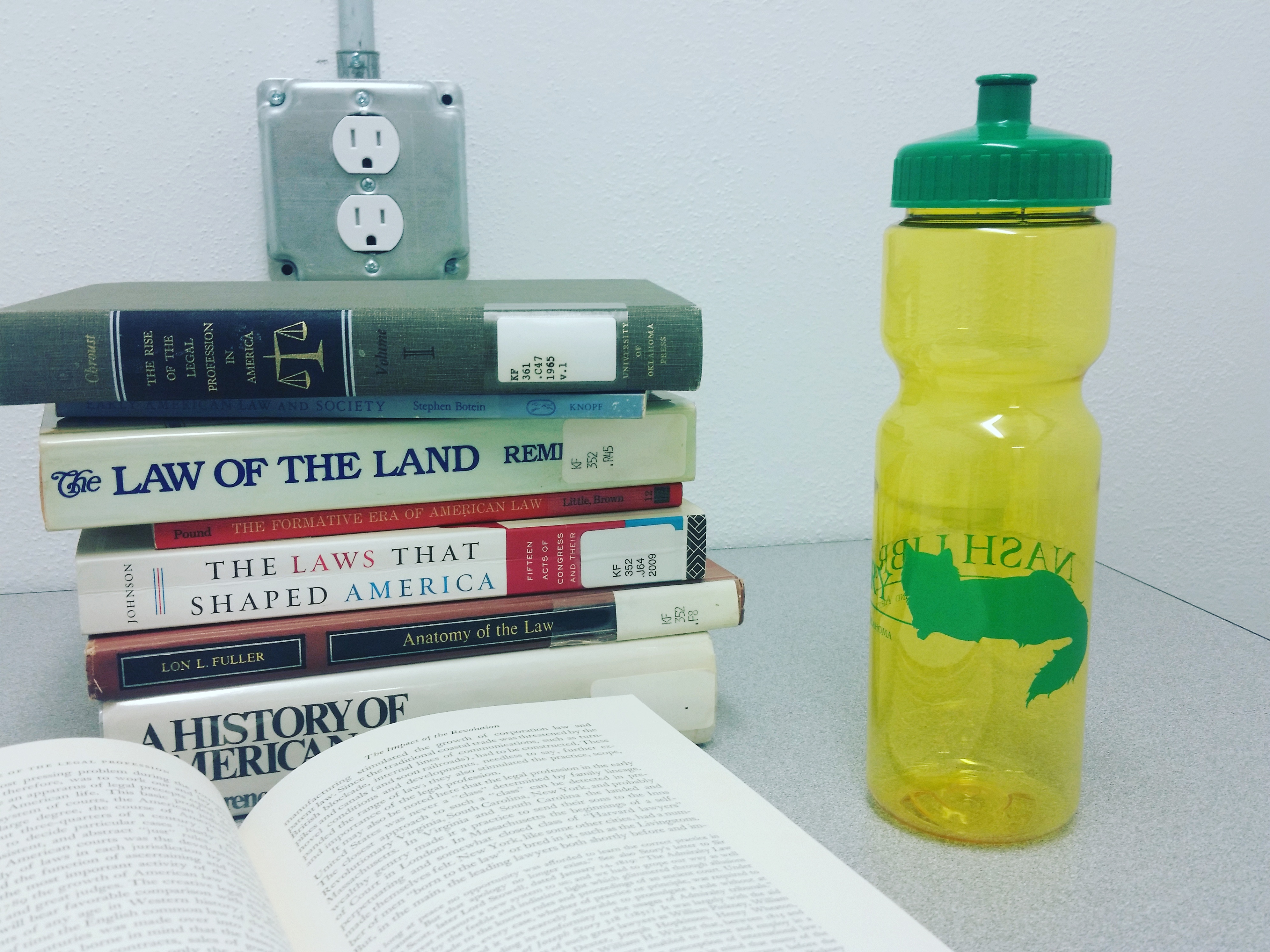 This could be you, studying in a second floor study carrel with a Nash Library water bottle emblazoned with the image of our faithful mascot, Addison Nash the library cat.

For those who are new at USAO (or missed out on the fun last year), Long Night at Nash is a night of studying, games, activities, and prizes! You can stay for as long or short a time as you would like. We gave away shirts last year, so we have Nash Library water bottles this year! When you arrive, you write down your goals for the night on a sheet of paper. When you leave, you write down what you've accomplished!

Here's how to get your free water bottle: During Long Night at Nash, everyone in the library will get a ticket on the hour. Once you have 4 tickets, you can pick up your water bottle. We're not just going to hand the water bottles out to anyone who walks in the door; you have to stay and study to get one! We'll have other prizes too; some will be awarded to the game winners, and some we'll award by drawing tickets by chance.

Thank you to all who voted on names for the study carrels! The winners are:

For the past several days, the USAO carpenters have been building and painting the walls for the carrels. When they're done, we're going to put up an image of each person in their carrel. We might put some quotes on the walls too, and perhaps some book cover images (or for Picasso, some images of his paintings, and for Beethoven, some printed music!).

Vote on names for the study carrels!

UPDATE: The votes are in, the polls are closed, and we'll write up a nice post announcing the winners shortly!

Nash Library is creating study carrels on the south end of each level of book stacks. We already have four equipped with desks and chairs on the main floor; we're going to be putting up some walls and building more on the second floor, and we'll have desks and chairs in the open areas on the upper two floors. We want the carrels to have interesting names, so we asked the IDS faculty to give us the names of people you have studied (or will study) in IDS courses. We made an online voting form where you can vote for your favorites. There is also a write-in entry option at the bottom of the list. The top 11 top vote-getters will have carrels named after them! The more people vote, the more the names will reflect the zeitgeist of the campus, so vote early and tell your friends to vote too!

We received a request in our Suggestion Box for Readability Studio to be installed on the library computers. The program was only available on the Gary Hall computers, and Gary closes at 5 p.m. We contacted Information Services, and they installed Readability on all the computers on the upper floor of the library! They are working on installing it in the 24/7 lab. Having it on the library computers will really make it more accessible for Education students; the upper part of the library is open until midnight Sunday through Thursday, and the 24/7 lab is always open 24/7.

We're glad somebody submitted this in the suggestion box; we wouldn't have known otherwise that this need existed! The suggestion box is located in front of the big front window halfway up the front stairway. It's a way to anonymously suggest ways we can improve the library. Some suggestions we can fulfill, and some we cannot, but we read and consider every one of them. We really want to know what would make the library better from your perspective. If you have any suggestions, go ahead and write them down and put them in the box!

Dr. Kate Sekula, one of our music faculty at USAO, has started a new blog, Bonus Tracks, where she will be featuring vinyl from our collection! We have thousands of vinyl records available to be checked out, and we're going to be getting record players for the Music Pocket Library soon so you can listen to records in the libray. Dr. Sekula has a Ph.D. in music theory and history from the University of Connecticut, and we are looking forward to learning from her about the music in our collection! We have such great faculty here at USAO! Here's a look at her first post about Béla Bartók Playing His Own Works: Excerpts from 'Mikrokosmos': 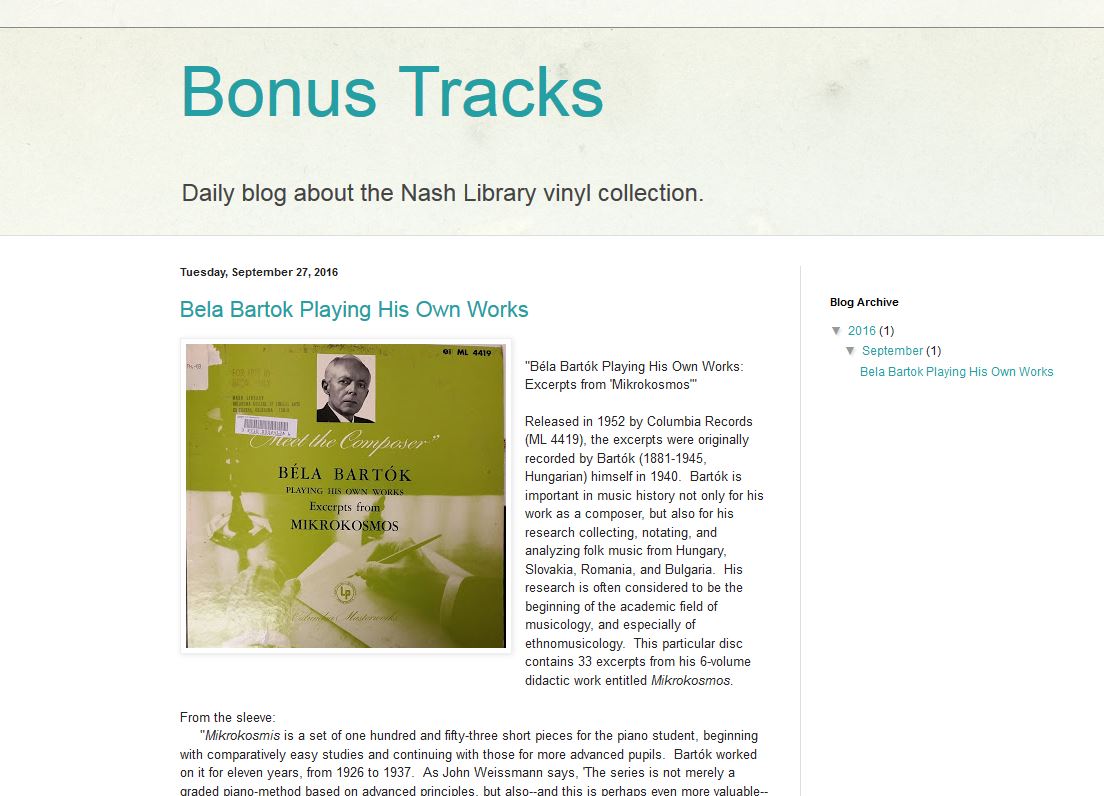 To make it easy to find the blog, we have added a link to the blog on our homepage. It's in the social media box midway down the page. The red arrow in the image below is pointing to the link: 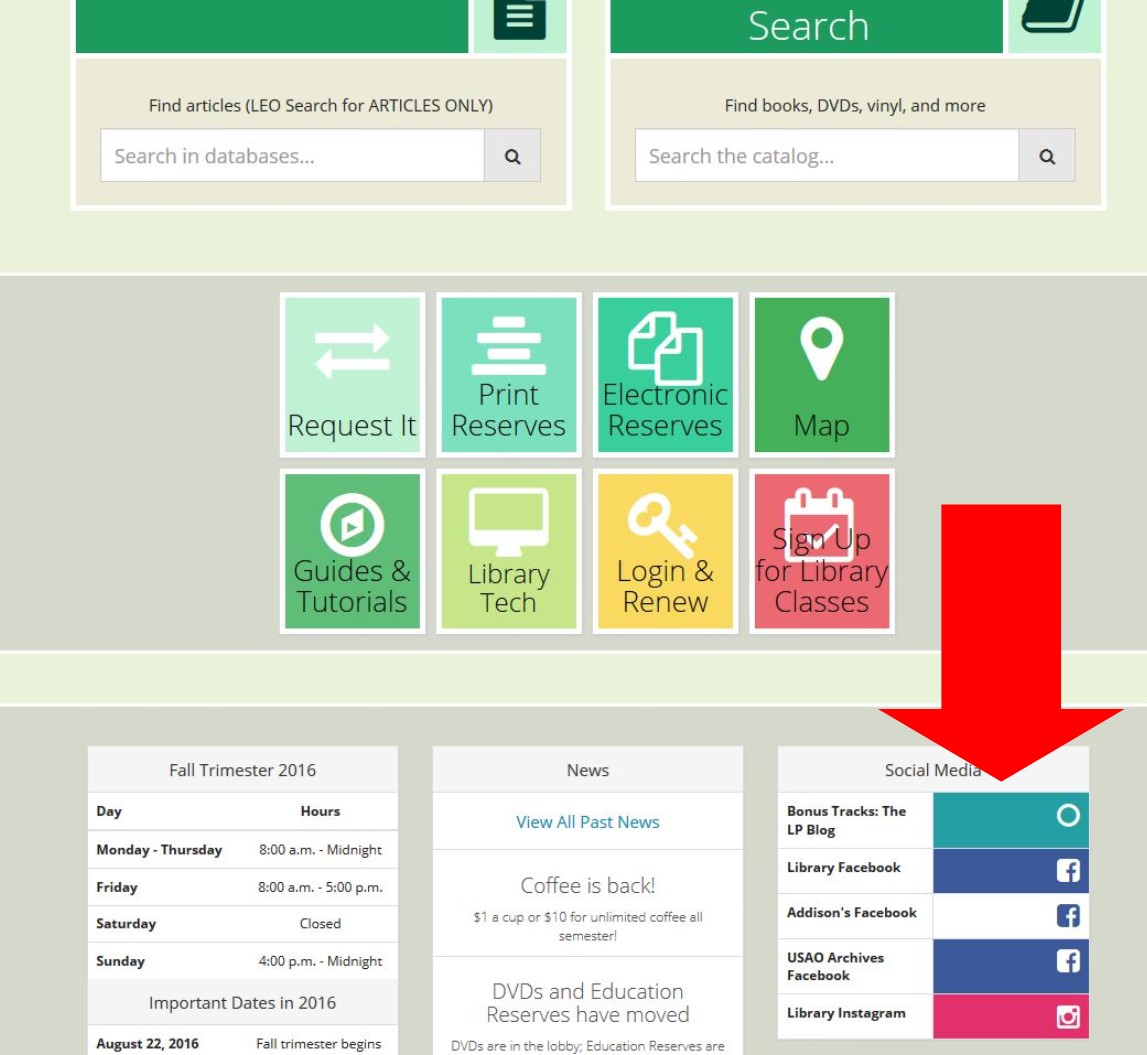 View All Past News

Laptops at Nash Library for checkout!

Thanks to the NASNTI grant office, Nash Library is able to have laptops for checkout. Students, you can check out these laptops at the front desk of the library with your student ID. Checkout periods are set for 6-hours, but can be modified if you need them longer. Talk to one of your friendly librarians, Nicole or Daniel, and they will get you set up!

The Podcast Booth is available to use. Set up a time to meet with Daniel Pool @ dpool@usao.edu about how to use the booth and its equipment.

We are excited to have you back!